I have a 2 year old spaniel named Franklin Delano Brown. Why Delano? Because i couldn’t think of anything else that fit so well with Franklin. It’s so presidential… Is he a fearless, born leader? Not even kinda. He’s a rebel without a clue, but smart as a whip when he wants to be. He’s got a 24/7 food dish, his own water dispenser and is allowed 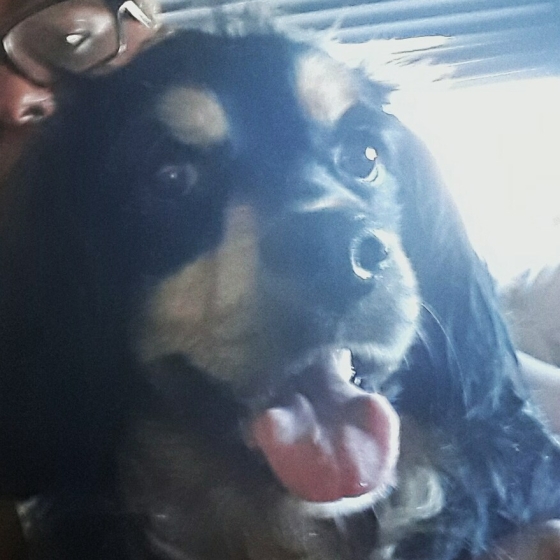 everywhere in the house except for on my bed (and the kitchen when i’m baking (except when my stupid neighbors are popping off fireworks, then he stays tucked in the corner nearest to me)). He’s already done a bid, so he’s got street cred, but is as gentle as a newborn bunny. He loves on everyone who walks by, which means he sucks as a guard dog. People freeze in place when he comes running at them, but when he goes in for the hug, tail whipping up a cool breeze, they melt right into him. I wanna be Frank.

Tbh, i am a lot like Frank. I have everything i could possibly need in life at my fingertips – food, water, shelter, family, friends, creature comforts, an approachable disposition despite looking formidable – everything. But the difference is I work for what i have instead of just sitting there looking absolutely adorable. I do sit and look absolutely adorable at times, but it doesn’t always get me what i want. I work. A lot. The majority of the work i do is completely unfulfilling and mundane, but it pays the bills and keeps me cute. The other work i do is a lot more fun and satisfying, but is just now sustaining itself, not so much my lifestyle. It will shortly, but not just yet. Then there’s side work i do that’s being there to help a friend and make a little change in the meantime. Inevitably, i make some kind of connection that pushes me or someone else forward, so that in and of itself makes it a worthy endeavor.

But this is what differentiates me from Frank. Besides species and gender. I work hard for what i have. In the past month, i have baked almost non-stop. I have had a few days respite, well appreciated, here and there, but with the tasting party at the beginning of the month, the market every other week, the food and wine festival the other weekend and this cupcake sale this past weekend, my nights have become a continuously flowing stream of batter. I’ve been running on 4-5hrs sleep daily for quite some time now and i’d like a little more. BUT, I’ve learned a lot about my time management, pre-planning and scheduling skills. I kinda rocked those this month and i’m patting myself on the back for it. But what i’ve also learned – and this is where i get frank – I Hate Cupcakes.

Yeah i said it! I’m a caker, a baker, a cake lady, a purveyor of perfect pastries, and i hate cupcakes. I don’t use the word Hate lightly. It’s a very heavy word with overwhelming implications, but when i do use it, i’ve thought it through. I Hate Cupcakes.

I didn’t care for them before simply because of my thing about frosting and decorating. A cupcake is barely two bites, but there’s enough frosting and crap on it to send you into a diabetic coma without even tasting the cake. Most cupcakes i’ve seen might as well be paper cups full of frosting, sprinkles and candy… But i pushed past my disdain and jumped into doing this $1 Cupcake Sale as a fundraiser for my church’s backpack giveaway. Porsha Kimble, aka Your Cake Diva, has a proven method for making a quick stack of cash doing this, so i knew it would be successful for raising money. Initially, I wanted to do it for myself, you know, to get some things paid up or off. But i knew we needed money for backpacks and supplies, so that inner altruist cleared her throat and said, “hey, do it for the kids…” and i couldn’t say no. Especially since she whispered it during church during announcements… So i pressed ahead, announced this grand endeavor and starting taking orders. I saw post after post of folks making 1000 cupcakes on this program and it made my brain hurt. That would be great, i thought, but there’s no way in hell i could fulfill that! So imagine my joy when at the end of the pre-order period i had just hit over two dozen orders.

As i jumped into whipping up batter and filling cups,

i realized something… I don’t like cupcakes. I don’t like the repetition, the piecemeal methodology, the miniaturization of the process… and this was before i’d even gotten to dressing them. I am not equipped to make cupcakes and i do not intend to put them on my menu. I have only ever owned two cupcake pans, and i couldn’t tell you the last time i used them for cupcakes. Breakfast muffins, mini quiches, broccoli tots, but paper liners filled with batter? Nah. So the process took a lot longer than i really intended or wanted. Like a lot longer. 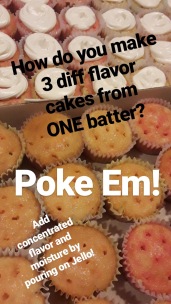 And then, since i refuse to do things like a normal person, instead of making 3 different batters, i made one and poked the cupcakes to flavor them with their respective Jell-O flavor. Have i told you how i feel about repetition? It’s like living inside the sound of nails on a chalkboard. I get a twitch in my eye just thinking about it. First round, I forgot my chopstick to poke the holes, so i used a plastic knife. How amazingly inefficient. I did get the brainchild to put the jello in squirt bottles to facilitate application, but didn’t think about the fact that i only had 2 bottles and 3 flavors… So many little details. Then came the frosting. I had imagined doing a lower blob of vanilla and a top blob of the corresponding flavor so you could tell what was what. Couldn’t find my food coloring…

So Wednesday night, i baked 150 cupcakes. Thursday night i poked and dressed 108 and 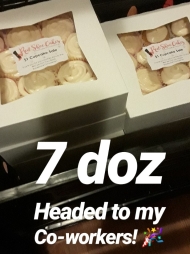 baked 72 more. Friday night i made a bunch more and poked and dressed the rest. Sunday night i made 36 more. 300 freakin’ cupcakes!!!!  Can i be frank again? I am 99% positive i will not ever want to ever make another cupcake ever again! LMAO!! lbvs…

Line cupcake pans, fill halfway to create 36 cupcakes. Bake according to box instructions. As cupcakes are cooling, poke 6-9 holes in the top with a chopstick (normally you’d use a wooden handled spoon for a cake, but that would be too big).

Mix gelatin with boiling water to dissolve, then let it cool (do not chill) while the cupcakes cool. I transferred it to a squirt bottle for ease of application, but do what works for you! Just make sure it’s cool enough to handle first. i failed to do that little step…

Once cool, carefully pour the flavor over the cupcake, making sure to drip down each hole. Frost with your choice of frosting (I used BC Whipped Cream Cheese flavor) and enjoy!