A couple weeks ago, i had a rough weekend. I had about 8-9 orders to fill. In my haste, i managed to botch 3 cakes. In the end, i fulfilled all my orders, had 3 bags of broken up cake and was exhausted from the bad attitude that had swelled. (Takeaway – focus on the positive, enjoy the process and everything will come out beautifully!)

Every baker at every level botches cakes. Either they overcook a couple minutes, or the oven heat isn’t balanced, or the cake sticks to the pan, or it breaks somehow. Happens all the time.

But it’s the smart baker who capitalizes on this! Originally, my oops became Sipps, but now that Sipps are in demand, i make cakes for them on purpose. So what’s the next new and spectacular idea? Shooters!

As you know, i’ve been baking forever. Like 40 years forever. There aren’t a whole lot of common desserts i haven’t tried a hand at, and just like the colored pancakes, some turned out way better than others. One of my best received creations has been the trifle. There’s something about

layering cake, cream, fruit or syrup and alcohol that brings down the house. I have a big vase at home that i usually use. It fits a whole cake, two tubs of Cool Whip and two boxes of pudding and it’s usually scraped clean by the end of dinner. It’s pretty in the vase, but a big blob of mess on your plate. Like my cousin loves to tell me, “It’s ugly but it sure tastes good!” I stumbled on to trifles the same way i came into Shooters – I messed up a cake. It stuck to the pan and i couldn’t keep it together trying to flip it onto the plate. How do you make crumbled cake pretty? Trifle it! (Fun Facts: check this article about the difference between trifles, parfaits and fools!)

So here we are. I could have made and offered giant trifles, but that’s really a party request kinda thing. Shot glass size just made more sense for caketails, right? I had some Godiva White Chocolate pudding on hand so i whipped that up, pulled out the three bags of crumbled cake, a couple bottles and had a party all by myself. The results are all over this page. To say they were well received would be an understatement! I have an awesome test group that readily inhales anything i present them, but are truly honest in their critique of them. I saw knees buckling, hats being thrown, eyes closing… It was beautiful. 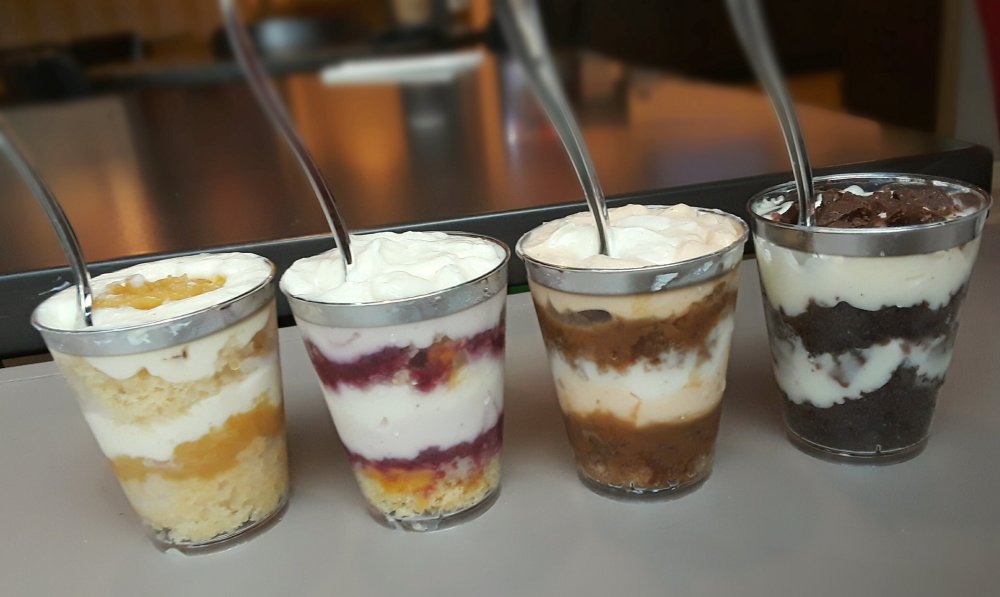 So now they’re available to you. Two layers each of cake, cream filling, spirits and drizzle (raspberry, caramel, chocolate, pineapple, whatever i have in stock…). Cake flavors will vary based on whatever crumble i have at the time, but i’ll always work out something that you’ll love! A dozen of these doozies for only $25 is a steal! Let me know what’s tickling your tastebuds and we’ll make it happen!

One thought on “You’re Gonna LOVE this!”